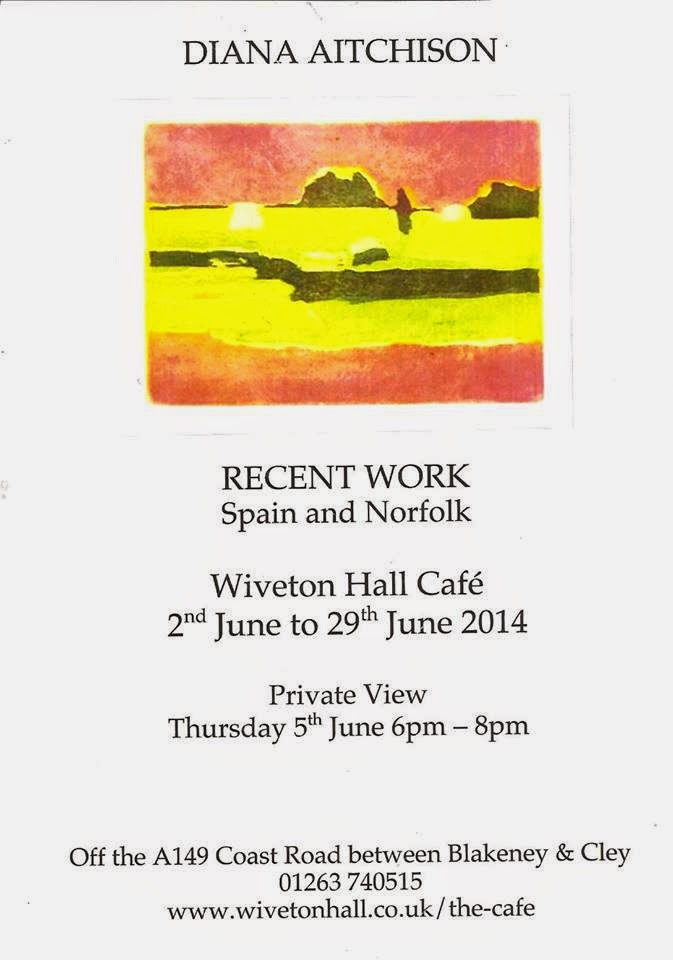 Reseña: Diana Aitchison is showing her well-known landscapes at the Wiveton Hall Cafe Norfolk, during the month of June 2014.
This is something of a homecoming for Diana, who lived and painted in Norfolk for half her life,and at Wiveton Hall in the late 70's and early 80's. She has also lived in Holland, France and Italy, where she worked mainly in pastel and watercolour. Now her home is in Northern Spain, but she often returns to Norfolk to draw the landscape to which she is so attached. On her return to Spain, where she has become a print maker, she reworks these drawings into etching, lithography or carborundum to achieve the masterly results exhibited here.
Diana studied at Great Yarmouth art school and The Byam Shaw, London.
One man shows in Norwich, London, Madrid and her home town La Coruna.
Anne Heyvaert writes...
The print makers job is to facilitate the reproduction of an image through repeated impressions on paper from a metal plate or stone.Originally - before photography - this was just a commercial process; however since then artists have experimented with the expressive possibilities of the medium; they've taken advantage of its intrinsic multiplicity to develop variations within one image or idea.
One only has to consider the multiple "state proofs" that Rembrandt himself preserved of the landscape variations by his contemporary Hercules Seghers, who was one of the first to use colour on an engraved surface.
Publicado por Juliki en 8:20