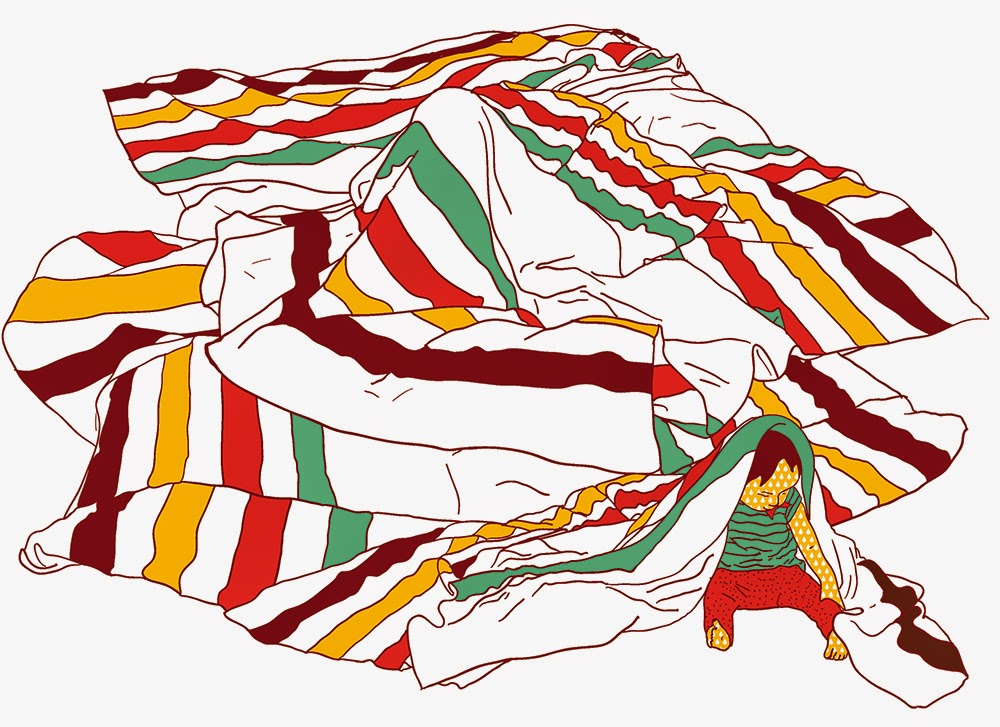 Reseña: Inspired by the vagaries of everyday life, Marie-France Tremblay uses techniques of drawing, printmaking, knitting, textile printing, and video animation to create different series of images or objects. Her subjects come from short news items, or places mundane, disturbing or even a little funny.
With les eaux tortueuses, Tremblay presents a large collage of hundreds of silkscreen prints that are stacked, interlocked, turned, sectioned and assembled to create the irregular pattern of a storm at sea. This mural, measuring 20 feet in length, has several figurative characters interacting in an undefined place filled with blankets, kitchen chairs and other objects associated with everyday life. The characters are actually one single person, a child, repeated and presented in various positions, like the cut and fragmented parts of an animation. The aim of the artist is to vary her invented imagery as much as possible so it cannot be regarded as a repeated pattern (like wallpaper) but rather becomes a complex image where the different elements of a same story are presented simultaneously. Using household materials such as draped blankets to illustrate the movement and rhythm of water, and tricking the eye with her many repetitions and superimpositions, Marie-France Tremblay invites us into a tempestuous nautical scene that references familiar things and simultaneously loses its meaning through the act of multiplication.
Originally from Abitibi-Témiscamingue, Marie-France Tremblay is now based in Quebec City. Her work has been featured at various art centres, including l’Œil de Poisson (Québec), à L’Écart (Rouyn-Noranda) and at Galerie B-312 (Montréal). She was also invited to complete an artist residency at l’atelier Imago (Moncton) and at the Glasgow Print Studio (Glasgow)
Publicado por Juliki en 18:41