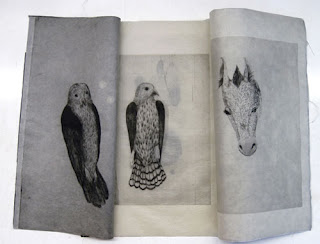 Reseña: Esta exposición es parte de PRINTHOUSTON 2012, un mes dedicado al grabado con diversas exposiciones y actos relacionados.
Although it’s only in its third year, PrintHouston, the annual citywide extravaganza of workshops, demonstrations, lectures, and exhibitions celebrating printmakers and their work, has already become a Houston art-scene fixture.
So much so that, although it’s known as a summer festival, PrintHouston’s 2013 event schedule spans 319 days, stretching the boundaries of the season even by Bayou City standards. Perhaps that’s fitting, since many PrintHouston events aim to show how artists are stretching the boundaries of a medium that print aficionados say still doesn’t get the attention it deserves.
But the lion’s share of activities is still concentrated in the traditional summer months, including two special exhibitions that will allow people to sample prints being made both in the region and far afield.
PRINT TX will feature the work of contemporary Texan printmakers, opening with a reception from 6 to 8 p.m. on June 13 at the Museum of Printing History. Juried by Peter S. Briggs, a curator at the Museum of Texas Tech University, the exhibition will feature 20 artists, from emerging to established, chosen through a blind jury process from 45 who submitted work.
Publicado por Juliki en 7:40